Article 13 and Losing the Internet as We Know It

An article by Polina Hristova

Preserve net neutrality if you value your freedom of speech– this was the title of an article I wrote last year when FCC’s threat against the free kingdom of the Internet loomed over like an impending Armageddon. One year later and we’re at it again, this time fighting a different battle that’s on home territory – Article 13, aka the “meme” ban. If you’re a small business or a creator with a following – this will inevitably affect your ability to express yourself, as well as share and critique other people’s content, and there will be legal consequences.

Article 13 states that “online content sharing service providers and right holders shall cooperate in good faith in order to ensure that unauthorised protected works or other subject matter are not available on their services” (read the entire Directive here). Simply put, it makes it mandatory for big platforms to enforce Copyright Filters which would scan everything that’s posted and censor any form of media that might be considered a copyright violation…. but no one really touches on how this enormous task will be managed. Article 11, on the other hand, claims that news aggregator sites such as Google News won’t be able to publish any portion of a news article, even if it’s just the headline, without a license. And to top it all off, if you’re a sports fan, you won’t be allowed to post photos or videos of the events/matches you’re attending.

YouTube CEO Susan Wojcicki published a blogpost warning against the impact of the Directive,

“Article 13 as written threatens to shut down the ability of millions of people – from creators like you to everyday users – to upload content to platforms like YouTube,” she wrote. “And, if implemented as proposed, Article 13 threatens hundreds of thousands of jobs, European creators, businesses, artists and everyone they employ.”

If you spend some time on YouTube, you will probably notice the increasing rate of dissatisfaction among creators due to unfair and confusing copyright strikes that can be inflicted upon them at any moment, on any video, old or new, which significantly affects their income as the money gets redirected to whomever filed the claim. If you google the issue, you will see ridiculous stories: from people who received copyright strikes for their own original songs, to PewDiePie, YouTube’s most subscribed channel, and his copyright disputewith a Twitch streamer over a comment he made about her content. Agencies are filling their pockets, often sending unexpected copyright claims to random YouTubers, stealing their revenue. In PewDiePie’s case, this situation showed clear abuse of the fair use policy. If you get three strikes – your account will be taken down. You can send an appeal to YouTube to review your video, but by the time the overworked, underpaid human who has been through a thousand videos before getting to yours sees it, the momentum will be gone along with your money.

Imagine this happening all over the Internet.

The European Union Directive on Copyright in the Digital Single Market is a proposed EU directive that is designed to limit how copyrighted content is shared on online platforms. The European Parliament has voted in favour of the directive, making tech giants such as YouTube, Facebook and Twitter directly responsible for any copyrighted material that’s illegally shared on their platforms. The purpose of this action is to direct more revenue from tech giants towards artists and journalists.

Many platforms will block EU citizens from accessing their content due to the enormous expenses associated with this filtering technology. YouTube’s Content ID system cost $60, 000, 000 to build and it categorises the videos by analysing audio tracks; the result of this multimillion investment is anything but satisfactory. The system often misses rampant abuse of fair use and bans legitimate content:

“…NASA gets blocked from posting its own Mars rover footage; classical pianists are blocked from posting their own performances, birdsong results in videos being censored, entire academic conferences lose their presenters’ audiobecause the hall they rented played music at the lunch-break—you can’t even post silence without triggering copyright enforcement.” (CORY DOCTOROW, Electronic Frontier Foundation) 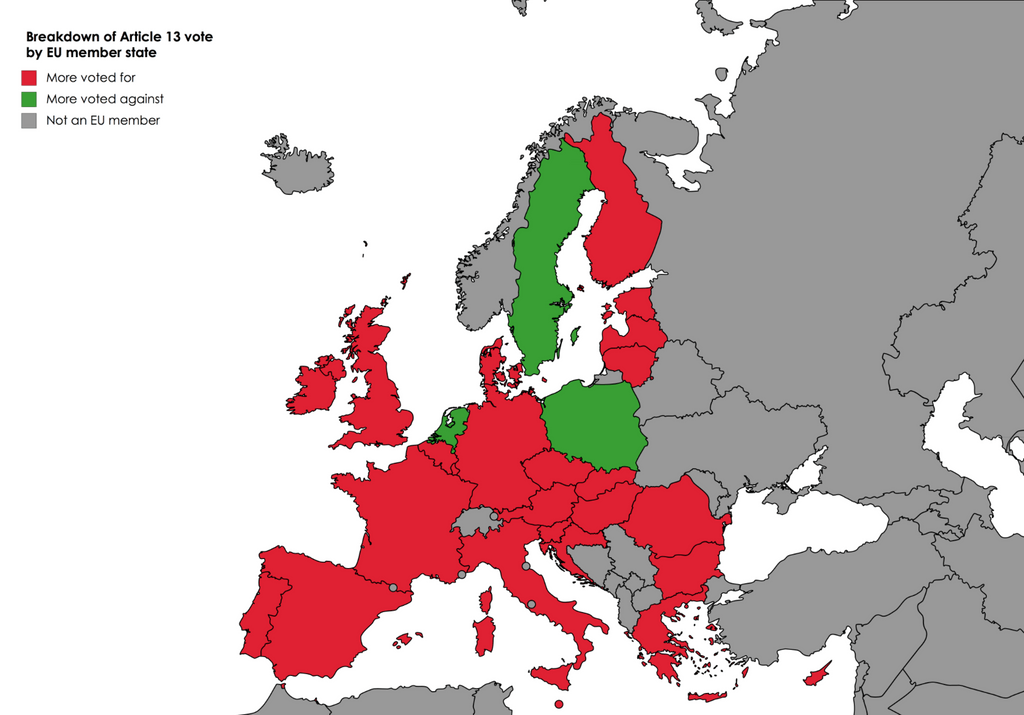 A large part of online media will be either unavailable or censored beyond recognition.

But is it really going to be as bad as it sounds? And most importantly – who thought this was an attainable solution?

The cost involved with training and hiring hundreds of thousands of people to review copyright appeals will be staggering and frankly – ridiculous. What YouTube’s Content ID does is but a fraction of what the Article 13 filter must do.

“The parliament’s approach is unrealistic in many cases because copyright owners often disagree over who owns what rights,” Wojcicki wrote in another blog post. “If the owners cannot agree, it is impossible to expect the open platforms that host this content to make the correct rights decisions.”

In January 2019, the Directive will be edited by the European Parliament and after it passes, the EU member states will have two years to enforce it domestically. All of this is happening before the elections to the European Parliament, so the Members of the EP might have a hard time convincing anyone to be re-elected.

It is funny how we made fun of China for banning Winnie the Pooh and now we find ourselves in a similar situation – but much worse. Big corporations are the only ones who can afford this filter; smaller companies and independent creators don’t stand a chance in a world where money will dominate the only free space we have. VPN usage will significantly increase and unsurprisingly, so are the “Thank god for Brexit” comments under the numerous YouTube videosaddressing the subject. Be careful who you make fun of… because it might just blow in your face.