Skip to content
BOATS, PLANES AND SATELLITES: A BEGINNERS GUIDE TO NON-TERRESTRIAL ROAMING 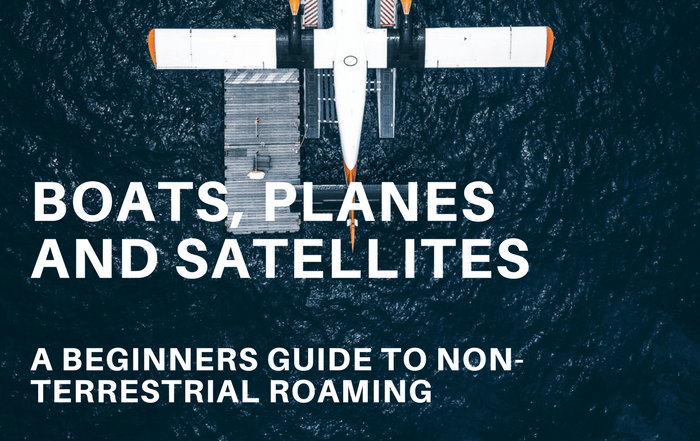 In October 2017 ROCCO will commence large scale research into all alternative roaming solutions in the market. We will produce a report accounting for every non-traditional roaming solution available in the market including my-fi, non-terrestrial roaming and some radical new alternatives which put all we know about roaming on its head.  If you are an Alternative Roaming provider and would like to feature in this report, please contact us at HQ@rocco.group. Currently we have over 20 solutions we are targeting and we would love to include yours.

The story of Non-terrestrial Roaming

Since the beginning of mobile roaming we have gradually learned to appreciate the benefits of being able to use our mobile phone (and subscription) while traveling to other countries. However, it’s only quite recently that the roaming coverage was extended into the non-terrestrial areas of airspace (Inflight) and sea (Maritime).

Satellite roaming or non-terrestrial roaming as it is defined by GSMA, had previously been regarded as superfluous and expensive. But now the tides (no pun intended) are turning thanks to all social media platforms, the selfie-stick and the overall urge to stay connected and the significant investments made by the airline and maritime industries in connectivity. It is time to take this service more seriously. The connected consumer after all is like what the business consumer used to be, all the time connected and needing their GSM connection not only wi-fi zones. The consumer therefore demands the choice of service and needs the payment mechanism. This means that the terrestrial mobile operators (MNO) who historically always struggled with Roaming on Planes and Boats must rethink their retail roaming plans and price points in a bit more detail to meet the consumer expectations.

The Age of Satellite

Two landmarks changes which have had a great impact in the satellite technology developments for consumers have been GPS the navigation system for cars and the portable satellite phones to be used in countries with no or poor telecoms infrastructure e.g. by the oil industry or NGO’s.

It was not until 2002 however that new “non-terrestrial” mobile operators were founded to serve the passengers with Inflight or Maritime roaming or both. The BA.46 GSMA Standards in Non-Terrestrial was created and the hard work to receive licenses from the regulators and authorities to operate a GSM network on board an aircraft or a maritime vessel had begun.

Non-Terrestrial is easy to define. It is basically any service that is not terrestrial and operated by traditional MNOs. It has not at this time ;) reached Extra terrestrial levels. maybe Elon Musk or Richard Branson may make steps to introduce inter-planetary roaming, but it hasn’t happened yet.

By definition it is prohibited for a non-terrestrial network to operate within national borders. Operating a non-terrestrial network means adhering to dozens and dozens of very specific and strict regulations with the main priority on the safety for the aircraft, the passengers and the environment. In order to get permission to operate a mobile network (Inflight or Maritime) the company must seek and get approval from numerous regulatory authorities world.

The mobile network installed on an aircraft or ship works the exact same way as the terrestrial mobile network does. The aircraft or the ship is installed with a pico cell, line antenna and NCU which can be compared to a cell site. All signalling, voice and data communication is conducted via a satellite link to the ground station where all the core components like VLR, MSC, Gateways, GGSN, SGSN, etc., are placed. From this ground station the non-terrestrial operator connects through gateways and carriers to its roaming partners.

The pico cell operates according to the GSM1800/2100 standards and it provides a GSM network enabling voice telephony, SMS and Internet access (GPRS/3G). The GSM signal is distributed by a leaky line antenna, which runs in full length of e.g. the aircraft cabin and provides a uniform linear coverage of the aircraft cabin. A network control unit (NCU) installed on board controls when the GSM network is switched on/off according to stipulated regulations. These measures ensure that handsets can only connect to the onboard GSM network when this is active.

For Inflight and Maritime operators the most important component in the network setup is the satellite link. For the Inflight and Maritime operators the satellite costs have been the hardest task to manage in the relationship with their roaming partners. From the start of the service in 2003 and until 2010 the derivative effect of high cost is an equally high wholesale rate (IOT – Inter Operator Tariff) towards roaming partners.

Today there is a much closer cooperation or affiliation between the operators and the satellite carriers either through strategic partnerships or direct ownership. This increased dependency is one of the key reasons why the cost of the backhaul link from the aircraft/ship to ground has come further down and will continue to reduce in the years ahead as volumes increase.

It can be defended that due to the very high IOT and their subsequent even higher retail roaming tariff offered to the customers, the MNOs had no reason to make a big shout about the service. Some MNOs chose not to launch the service either due to the high IOT or lack of interest/demand. Fortunately the satellite costs are starting to come down which should incentivise both non terrestrial and terrestrial operators to equally reduce their prices to the benefit of the customer. But unfortunately for the consumer that has not happened as you could have hoped until recently.

For a long time, non-terrestrial roaming had been a challenge for all the companies involved. The non-terrestrial service providers had to manage with high satellite costs and relatively low volume while MNO’s are faced with the challenges of reduced roaming revenue driven by EU regulation. Many of the MNOs have explained it is hard to justify why customers should pay 1 €cent per MB in EU but almost 7 € per MB for non-terrestrial roaming.

MNOs outside the EU are also putting on pressure. Some MNOs had decided previously to block the satellite roaming service while others reduced the end user price significantly.

The Asia region is the leader in mobile data consumption and the MNO’s have taken the lead introducing robust retail packages with Day or Weekly packages. But it’s also interesting to see the trend continuing into Middle East and GCC region, but the old regiment MNOs from Europe, with a few exceptions continue sticking to a Fair Usage Policy.

In the 90’ies when roaming was new it was also widely accepted as a luxury commodity, but while customers were learning about roaming in a neighbouring country or in a country on the other side of the world, the roaming experience on board a ship or an airplane was not promoted with the same enthusiasm when it was introduced.

Despite all the good intentions to keep the customers/passengers informed of a roaming scenario through Bon Voyage SMS, billboards or flyers, there is always a lurking risk of a bill shock complaint after each ended trip as the concept of satellite roaming is widely not understood.

Most complaints have come from passengers on ferries between two countries where the sailing time is relatively short. One example comes from Denmark where the sail time on one route between Denmark and Germany is only 60 minutes whereof 20 to 25 minutes is in international waters.

Customers have complained arguing that they thought they were either attached to a Danish or a German network, or that the applicable roaming charges were within the EU regulated caps and not at maritime roaming rates.

It is clear to the author that the responsibility to reduce the complaints to zero lies with the MNO by offering transparent and affordable retail roaming packages and to educate the customers better about satellite roaming situations.

WiFi connectivity on ships and aircraft started out at the same time as the mobile network. The big question with airlines is if WiFi and GSM can co-exist, however studies made by AeroMobile Communications Limited show that the two platforms supplement each other well. One service doesn’t make the other redundant.

For some airlines it has raised the question, but on a much smaller scale, if it is technically possible to substitute the GSM network with an upgraded Next Generation WiFi which seamlessly can authenticate and connect a mobile device, and besides consuming data can also perform WiFi calling (Vo-WIFI).

The progress and roll-out of Next Generation WiFi has not caught sufficient momentum and is primarily aimed at capacity/coverage in-fill in a terrestrial network. WiFi and cellular connectivity will continue to complement each other in the non-terrestrial market if we are going to provide the consumer with choice of service, choice of payment mechanisms and also maximise the number of travellers that can connect.

The future for Non-Terrestrial roaming remains bright; driven by our insatiable demand to be connected and exploding penetration of smartphones. If a consumer is roaming at transparent and affordable prices, the Inflight and Maritime operators in partnership with the airlines and shipping companies can shape the future of Inflight/Maritime entertainment and communication.