Tables and charts presented by ABTA in its recent report Making a success of Brexit for travel and tourism: Priorities for the Brexit negotiations reveal some interesting insights into the travel dynamics between the UK and the EU. The EU is an extremely important market for UK domestic and outbound travel and tourism businesses. In 2015, UK residents made 37 million holiday and business trips to the EU and EU residents made over 16 million holiday and business trips to the UK, which basically states what Roaming Managers know: The UK remains an important Roaming relationship for Outbound and Inbound Roaming.

Article from the Independent with further speculation.

The British travel industry has presented its demands for the UK’s departure from the European Union – with a warning that a failure to negotiate swiftly could prove “hugely damaging” for airline passengers.

Abta, the association representing travel agents and tour operators, is calling for arrangements for reciprocal medical treatment for tourists and free mobile roaming to continue for British travellers to Europe. It has also demanded that the UK gets an exemption from the EU’s plans for tougher red tape.

The organisation campaigned strongly for a Remain vote in last June’s referendum. Its new report, Making a success of Brexit for travel and tourism: Priorities for the Brexit negotiations, stresses a post-EU settlement is a matter of extreme urgency for the travel industry.

“Many Abta members have holidays on sale up to 18 months in advance,” says the report. “With negotiations taking two years, it is vital that the Government agrees effective transitional arrangements with the EU whilst the finer details of the UK’s exit are worked out.”

EU negotiators say discussions on future arrangements will begin only when the terms of Britain’s exit, including a financial settlement, are agreed. The earliest this could happen is autumn 2017 – by which time some trips for spring 2019 will be on sale.

Top of Abta’s agenda is a deal on flights. Britain is the leading aviation power in Europe, with direct flights to more international destinations than any other EU country – nearly 400. Most of these are from London, which handles far more airline passengers than any other city on earth. The city is well ahead of New York, Tokyo, Paris and Dubai.

Britain and Ireland were at the forefront of liberalising aviation, enabling easyJet and Ryanair to flourish across the EU.

Most flights to and from the UK are governed by the European open-skies agreement, which allows any EU airline to fly anywhere in Europe, and a second treaty governing travel between the EU and the US; 10 years ago, the UK’s bilateral agreement with Washington on transatlantic flights expired when the pan-European agreement was signed.

“It is critical to retain or replace these agreements so that UK airlines can continue to operate established air routes,” warns Abta.

“There is no international fall-back option, such as World Trade Organisation rules, that exists for the aviation sector.”

The Government issued a joint statement with Airlines UK in November saying:

“We want to make sure we have liberal access to European aviation markets.”

Mark Tanzer, Abta’s chief executive, told The Independent: “The history of aviation has been protectionist, with access to airports and slots easily skewed towards national carriers.

“It would be ridiculous to say there is no possibility of a return to that.”

Leading airline bosses have expressed concern that Europe will seek to deplete the UK lead in aviation. 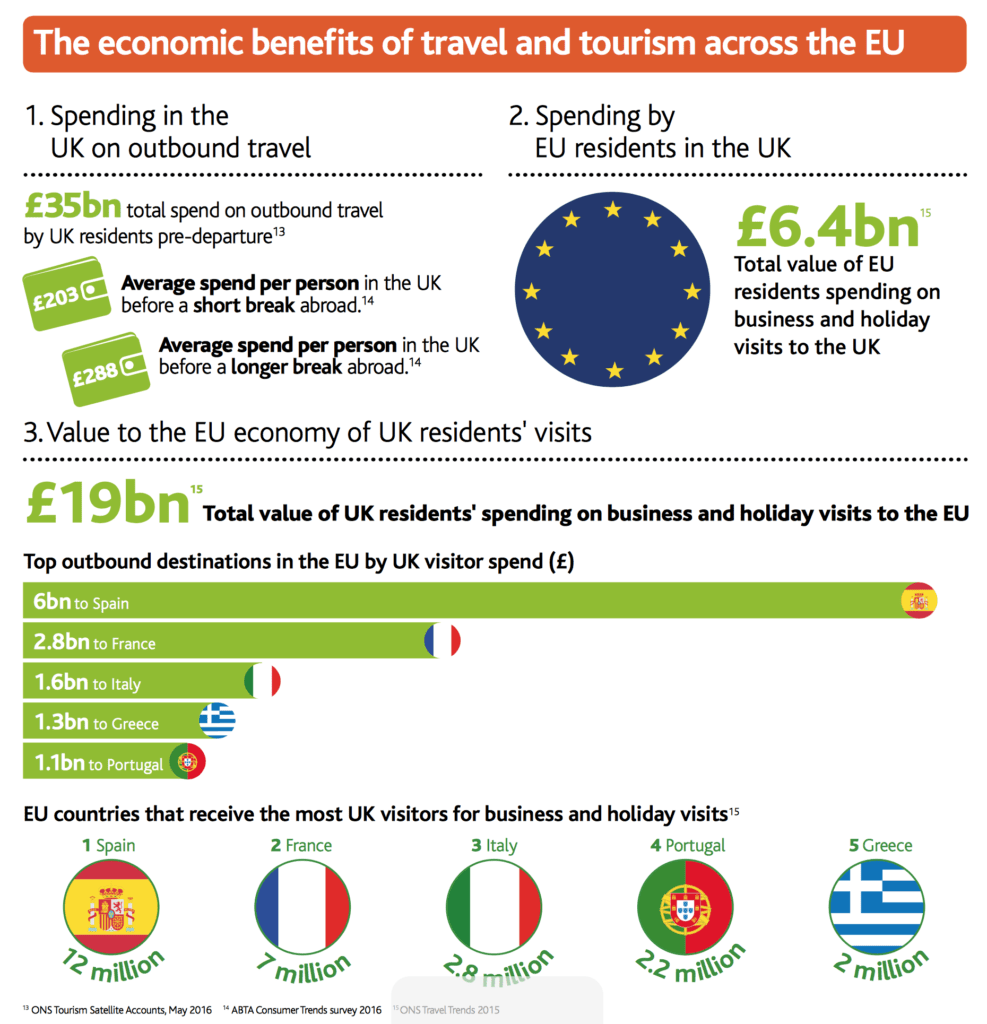 “I fear Europe will see this as an opportunity to damage the UK. The idea we’re just going to go in and say ‘here’s what we want, now give it to us’ is naive.”

His counterpart at Ryanair, Michael O’Leary, has speculated that aviation from the UK to the EU could be temporarily grounded from March 2019. He called the letter triggering Article 50

US carriers, angry about the Irish subsidiary of the low-cost Norwegian airline launching routes from Scotland to the US this summer, have been lobbying President Trump to stifle competition.

Norway and Iceland are allowed to participate in European aviation on the same terms as EU nations, but in return for accepting the EU’s rules.

Olivier Jankovec, director-general for the airports’ association, ACI Europe, said: “While similar arrangements could certainly be replicated with the UK, they seem incompatible with the UK Government’s agenda of ‘taking back control of our laws’.”

Abta is also concerned about the EU’s planned European Travel Information and Authorisation System (Etias), which is aimed at nationalities outside the EU. The intention is largely to emulate the Esta scheme that the US set up in the wake of 9/11 to evaluate prospective visitors.

With Etias as currently envisaged, people intending to visit will have to go online to enter personal data, and answer questions about their health and any criminal convictions, even for a brief “booze cruise” from Dover to Calais. Duty-free allowances are expected to be reintroduced.

A parallel exercise could see life at frontiers much more complicated for all non-EU nations at borders of the Schengen common travel area. The European Commission is putting together an “Entry-Exit System” (EES) that “will apply to non-EU nationals, both those that require a visa and those that are exempted, travelling to the Schengen area”. Travellers will be fingerprinted and have a photograph taken.

“We need to know who is crossing our borders. This way we will know who is travelling to Europe before they even get here.”

Abta is seeking an exemption for British travellers from these schemes. Mr Tanzer said: “A new relationship would be a good signal going forward. Even if it’s unprecedented, why not ask for it?”

Reciprocal health care is another area of uncertainty. In 2015, a British citizen used the European Health Insurance Card every two seconds on average. The EHIC currently provides medical treatment for UK residents in public hospitals in Europe on the same basis as local people.

The Brexit Secretary, David Davis, implied at a recent select committee hearing that the scheme would end.

When asked to confirm that UK citizens would no longer have access to the EHIC, Mr Davis responded: “I think that’s probably right.”

Britain and Ireland were at the forefront of liberalising aviation, enabling easyJet and Ryanair to flourish across the EU (Simon Calder)
In that event, travel insurance premiums for trips to Europe are likely to rise steeply. Older travellers, particularly those with pre-existing medical conditions, would be disproportionately affected.

“It’s a benefit to the UK as well as a financial cost, a benefit that’s worth preserving. I don’t see why we should forgo that.”

Millions of British holidaymakers this summer will benefit from the ending of roaming charges on mobile phones anywhere in the EU. From 15 June, phone calls, texts and internet use on mobile phones within Europe will cost the same as in Britain.

The Abta report demands that the Government “replicate this EU-level agreement to ensure that British and EU customers continue to benefit from the abolition of these additional charges”.

“We would hope there is agreement from EU receiving markets that this is a good thing to preserve. Money saved on exaggerated roaming changes can be spent on food and drink in Spain.”

Nothing will change before the day Britain leaves the EU, but even the triggering of Article 50 has caused confusion among travellers. A number of people have contacted The Independent to enquire if the rules on passports have already become more stringent.

Europe’s chief negotiator, Michel Barnier, has warned in the Financial Times that the negative consequences of failing to reach a deal include

“severe disruption to air transport and long queues at the Channel port of Dover”.

But Mark Tanzer of Abta said the freedom to travel that the British currently enjoy was “indispensable”.