Toronto-based Sugar Mobile offers a cut-rate wireless service that relies primarily on WiFi access. When a cellular connection is necessary, Sugar turns to a roaming agreement its sister company Ice Wireless has with Rogers. Ice operates in the Northwest Territories, Yukon and Nunavut, but Sugar, which does not have a network of its own, markets its service to customers across the country.

In a pair of decisions Wednesday, the Canadian Radio-television and Telecommunications Commission said that companies that do not own airwaves or operate a cellular network in a particular geographic area cannot allow their customers to “permanently roam” on the networks of the established national carriers.

In a landmark 2015 decision, the CRTC said it would regulate the rates the Big Three – Rogers, Telus Corp. and BCE Inc. – charge players who have more limited infrastructure, such as Videotron Ltd. and Freedom Mobile , for roaming services.

It was a move designed to boost the ability of those smaller companies to compete, but the CRTC also said it would not force the national carriers to sell access to providers who do not build their own infrastructure.

Mobile virtual network operators (MVNOs) offer competition to major carriers in many countries and often operate at the lower end of the market, but they are not prevalent in Canada.

Now, in the ruling on the dispute between Sugar Mobile and Rogers, as well as a separate decision clarifying the terms and conditions of wireless roaming, the CRTC said “it would be inconsistent with the wholesale wireless framework to permit mandated wholesale roaming to be used as a means to obtain permanent access to the incumbents’ networks.”

“Such an approach would render meaningless the commission’s decision not to mandate MVNO access to these networks and would require the commission to fundamentally redefine the meaning of wholesale roaming,”

Sugar, which launched in early 2016, gives its subscribers SIM cards that are assigned to 867 area codes in Ice’s operating territory. But it lets users choose a phone number with an area code from anywhere in Canada, and that becomes the number that people calling them dial.

Ice’s roaming agreement allows it to keep its customers connected when they travel to other parts of the country.

What was unclear was whether Sugar could piggyback on that agreement to provide service to customers who live outside of Ice’s network coverage. Sugar argued that its service is provided primarily through WiFi and said customers only access Rogers’s network on an “incidental basis.”

But the CRTC concluded that Ice Wireless was allowing Sugar Mobile, as its MVNO, to rely on

“permanent, rather than incidental”

“There is no indication that Sugar Mobile has taken any steps to limit its end-users’ access to Rogers’s cellular network to levels that could be considered incidental,”

It ruled that Rogers does not have to continue providing wholesale roaming access in this situation but said immediate termination of the roaming agreement could affect Ice Wireless customers from the North who are legitimately using the service.

The CRTC said Ice Wireless has 50 days to confirm that Sugar Mobile is not “making unauthorized use of Rogers’s network.”

Samer Bishay – the chief executive officer of Sugar Mobile and Ice Wireless and the two companies’ majority owner Iristel Inc. – said Wednesday he was disappointed in the ruling,

“not only for Sugar Mobile but for Canadians who pay some of the highest wireless rates in the world.”

Mr. Bishay said the ruling was

“like giving us a death sentence without seeing the judge,”

explaining he was frustrated with the CRTC’s procedure of relying on written filings in this case and not holding an in-person hearing.

He is reviewing the decision and considering his options, and suggested Sugar Mobile might find a different way to operate after the 50-day deadline has passed. The company has about 5,500 customers, according to Mr. Bishay.

Rogers vice-president of regulatory affairs David Watt said in a statement he is “pleased the CRTC made the right call,” adding:

“We believe in innovation and a fair, competitive market – this was about violating a roaming agreement, plain and simple.”

“It would be inconsistent with the wholesale wireless framework to permit mandated wholesale roaming to be used as a means to obtain permanent access to the incumbents’ networks.”

Source: the Globe and Mail

Now let’s look at all mobile network operators, their brands, networks and virtual networks. We will start from the huge nationwide operators and end with small ones.

Another nationwide mobile communication services provider. It grants the most wide selection of services among all Canadian providers, allowing their customers to enjoy such services as CDMA, iDEN, HSPA+, LTE, PCS, SMR and AWS. In fact, they can give you access to all but GSM850 bands. This company owns Clearnet and Koodo Mobile, yet they don’t work with other mobile virtual network operators, but despite that they have almost 30% of the Canadian mobile communications market share.

This company provides their services in Saskatchewan. Those services are CDMA, HSPA+ and PCS.

This company works in Manitoba and provides such mobile communication services as CDMA, HSPA+ and PCS, the same as previous company.

This company grants its mobile services in such metropolitan areas as Toronto, Vancouver, Ottawa, Edmonton, Calgary, and in addition in such regions as Orleans in Ottawa, Hamilton, Kitchener-Cambridge-Waterloo Area, Abbotsford, Guelph, Niagara region and Barrie. They work with such mobile communication standards as GSM850, HSPA+, LTE, PCS and AWS.

It operates as a metropolitan mobile phone service provider. This company grants you access to CDMA and PCS cell phone bands.

There are also many small mobile networks in Canada which give their customers access to different communication technologies:

In addition to small mobile networks there is also a mobile virtual network operator that is not connected with large ones described above – Roam Mobility that works with T-Mobile USA. 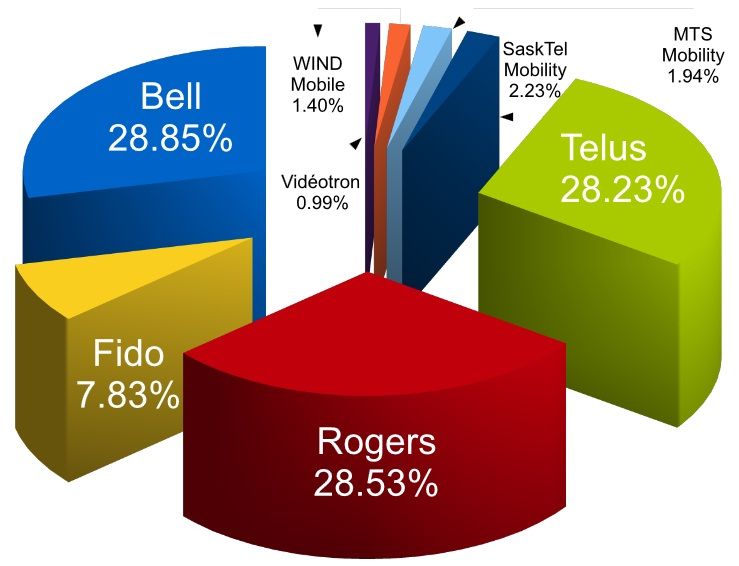