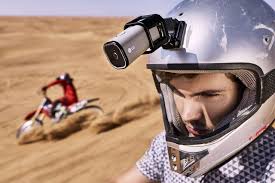 LG is taking on GoPro with its new LTE Action Camera. As the name implies, LG has managed to build LTE directly into its tiny camera so you don’t need to pair it to a smartphone to stream live video. GoPro’s do not include LTE chips just yet, so this opens LG’s LTE Action Camera to a whole new world of uses. A completely waterproof case (that will be available later this year) will let you live stream surfing, scuba diving, or anything else straight to YouTube.

LG’s action camera also has some impressive hardware specs inside. The 12.3-megapixel camera has a 150-degree wide angle lens, and it even has GPS, an accelerometer, and a gyroscope. LG says its camera can be immersed in up to a meter of water for 30 minutes, but a completely waterproof case will mean you can stay under water for as long as the battery lasts. LG’s decision to include an accelerometer and gyroscope could bring some additional software benefits in the future. TomTom’s Bandit uses these hardware features to mark your footage for big action moments or times when you’re going fast or fall down, and it’s reasonable to expect LG to have similar features if the hardware is present.

LG is claiming around four hours of full HD recording time to microSD storage, and live streaming should be around two hours. LG is planning to launch the LTE Action Camera in South Korea next month, followed by European markets and North America. LG hasn’t released pricing or exact availability just yet, so we’ll be waiting a little longer to see how it compares to the pricing of GoPro’s latest action cameras.